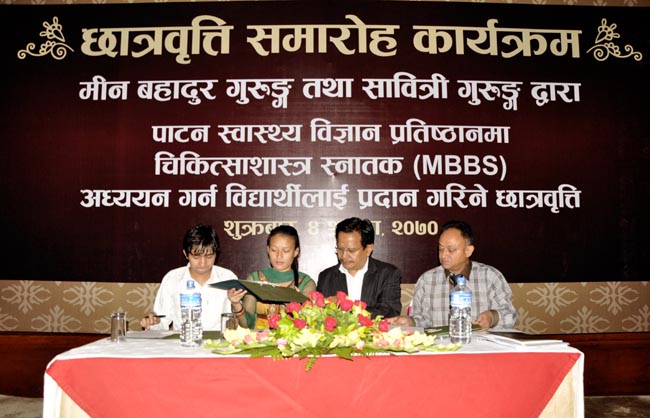 Mr Min Bahadur Gurung and Mrs Sabitri Gurung, the social workers and owners of Bhat-Bhateni Supermarket handed over collaborative scholarship for the year 2012 amidst a program held in the presence of renowned personalities from various sectors on 19 July. In the kind of scholarship, two-third of the cost is born by the sponsor whereas the rest one-third is contributed by the academy.

The scholarship for the year has been provided to two students Mr Basanta Raj Joshi from Baitadi and Ms Melina Hamal from Dolpa for six-year long MBBS program.The Gurung couple has been providing two scholarships each year for remote districts of Nepal from the very first year of the PAHS MBBS program. Dhanamaya Gharti Magar from Rolpa and Shailesh Shrestha from Khotang, the home district of Mr Gurung were the first recipients of the award in 2010.

Similarly Dabal Bahadur Malla and Tai Anjuk Lama were able to grab the scholarships from Mugu and Humala districts respectively in the year 2011.

Mr Gurung says that they have initiated the sponsorships as a part of Corporate Social Responsibility (CSR) initiative of the Bhat-Bhateni Supermarket. Gurungs own a chain of supermarkets in the country by the name of Bhat-Bhateni with five within the Kathmandu valley and one in Pokhara.

Beside the scholarship, he has made a great contribution to other sectors as well and has been a role model to the private sectors for the socio-economic transformation of the country.

PAHS welcomes the generous people/organizations from around the world to join hands with PAHS like the Gurung couple to overcome its ambitious mission to produce technically competent and socially responsible health professionals who are dedicated to serve especially the rural-poor of Nepal making sustained improvement in health indices of the country.