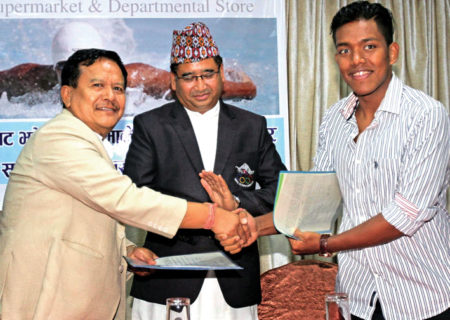 Swimmer Shirish Gurung and Bhatbhateni Super Market reached the sponsorship deal for one year amidst a ceremony here today.

As per the memorandum of understanding — signed by Gurung and Managing Director of Bhatbhateni Min Bahadur Gurung — the 17-year-old swimmer will receive Rs 100,000 per month, sports kits in all the national and international events and Rs 10,000 for breaking a national record. In return, Gurung will endorse Bhatbhateni as a brand ambassador and will use the kits with the sponsor’s logo.

Swimmer Gurung said he was happy to get tied up with big corporate house after spending 13 years in the sport. “I am happy to get the opportunity to be associated with Bhatbhateni and the happiness is double as I am also going to participate in Olympic Games this year,” he said. “This tie up has encouraged me to do better in upcoming Games and other international events,” said Gurung,who has broken national record 45 times in his career. Currently he holds 12 individual and two relay records.

Bhatbhateni MD Gurung said he was happy to sponsor a star player. “We decided to join hands with Shirish Gurung as we wanted to support a talented player and he is the best in his field as he has broken 45 national records,” said Gurung. “And with this we have started our initiation to support sports and athletes.”

Nepal Olympic Committee President Jeevan Ram Shrestha said the whole week was dominated by sports. “We had Pulsar Sports Award and Executive Committee Meeting of AIPS-Asia, President Bidhya Devi Bhandari bade farewell to Olympic squad, PM KP Sharma Oli felicitated the SA Games medallists and this agreement,” said Shrestha. “This agreement is not only important for Shirish Gurung and Bhatbhateni, it also plays significant role in Nepali sports. We have to lure more and more corporate houses so that we can develop the sports sector,” he added.

President of Nepal Swimming Association Ashok Bajracharya said he had high hopes from Shirisg Gurung and Gaurika Singh. “With these swimmiers, we have aimed at getting qualification in 2020 Olympic Games and also win four gold medals in the 13th SA Games,” Bajracharya said.